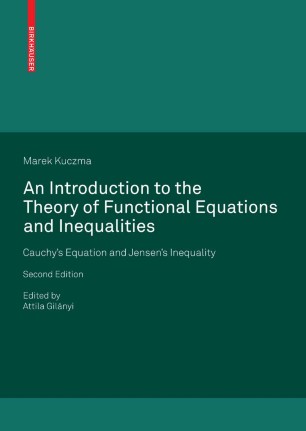 An Introduction to the Theory of Functional Equations and Inequalities

Besides his several administrative positions and his outstanding teaching activity, he accomplished excellent and rich scientific work publishing three monographs and 180 scientific papers.

He is considered to be the founder of the celebrated Polish school of functional equations and inequalities.

"The second half of the title of this book describes its contents adequately. Probably even the most devoted specialist would not have thought that about 300 pages can be written just about the Cauchy equation (and on some closely related equations and inequalities). And the book is by no means chatty, and does not even claim completeness. Part I lists the required preliminary knowledge in set and measure theory, topology and algebra. Part II gives details on solutions of the Cauchy equation and of the Jensen inequality [...], in particular on continuous convex functions, Hamel bases, on inequalities following from the Jensen inequality [...]. Part III deals with related equations and inequalities (in particular, Pexider, Hosszú, and conditional equations, derivations, convex functions of higher order, subadditive functions and stability theorems). It concludes with an excursion into the field of extensions of homomorphisms in general." (Janos Aczel, Mathematical Reviews)

"This book is a real holiday for all the mathematicians independently of their strict speciality. One can imagine what deliciousness represents this book for functional equationists." (B. Crstici, Zentralblatt für Mathematik)