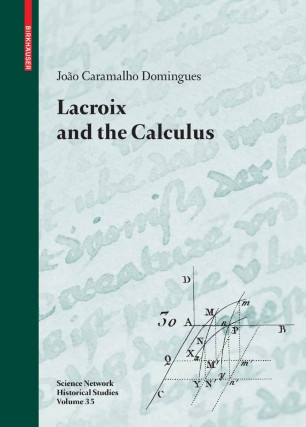 Lacroix and the Calculus

Silvestre François Lacroix (Paris, 1765 - ibid., 1843) was a most influential mathematical book author. His most famous work is the three-volume Traité du calcul différentiel et du calcul intégral (1797-1800; 2nd ed. 1810-1819) – an encyclopedic appraisal of 18th-century calculus which remained the standard reference on the subject through much of the 19th century, in spite of Cauchy's reform of the subject in the 1820's.

Lacroix and the Calculus is the first major study of Lacroix’s large Traité. It uses the unique and massive bibliography given by Lacroix to explore late 18th-century calculus, and the way it is reflected in Lacroix’s account. Several particular aspects are addressed in detail, including: the foundations of differential calculus, analytic and differential geometry, conceptions of the integral, and types of solutions of differential equations (singular/complete/general integrals, geometrical interpretations, and generality of arbitrary functions).

Lacroix and the Calculus should appeal to historians and mathematicians interested in the history of the calculus (and especially in the background to Cauchy and Bolzano) and in its teaching in the late 18th and early 19th centuries.

“The present book is a thorough presentation of the calculus from Lacroix’s point of view … . Lacroix and the calculus concludes with four appendices, a Bibliography (thirty-three pages), and an index. … Anyone interested in the history of the calculus will find this book to be of great interest and value in his or her own studies.” (F. J. Papp, Mathematical Reviews, Issue 2011 i)
Buy options