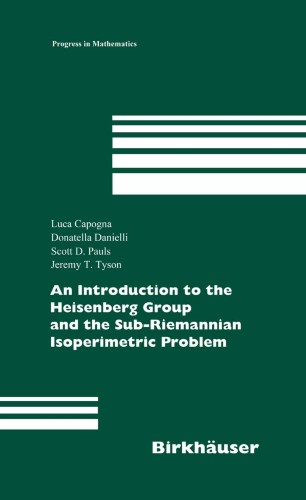 Part of the Progress in Mathematics book series (PM, volume 259)

The past decade has witnessed a dramatic and widespread expansion of interest and activity in sub-Riemannian (Carnot-Caratheodory) geometry, motivated both internally by its role as a basic model in the modern theory of analysis on metric spaces, and externally through the continuous development of applications (both classical and emerging) in areas such as control theory, robotic path planning, neurobiology and digital image reconstruction. The quintessential example of a sub Riemannian structure is the Heisenberg group, which is a nexus for all of the aforementioned applications as well as a point of contact between CR geometry, Gromov hyperbolic geometry of complex hyperbolic space, subelliptic PDE, jet spaces, and quantum mechanics. This book provides an introduction to the basics of sub-Riemannian differential geometry and geometric analysis in the Heisenberg group, focusing primarily on the current state of knowledge regarding Pierre Pansu's celebrated 1982 conjecture regarding the sub-Riemannian isoperimetric profile. It presents a detailed description of Heisenberg submanifold geometry and geometric measure theory, which provides an opportunity to collect for the first time in one location the various known partial results and methods of attack on Pansu's problem. As such it serves simultaneously as an introduction to the area for graduate students and beginning researchers, and as a research monograph focused on the isoperimetric problem suitable for experts in the area.