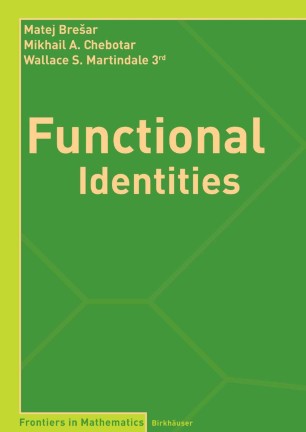 The theory of functional identities (FIs) is a relatively new one - the first results were published at the beginning of the 1990s, and this is the first book on this subject. An FI can be informally described as an identical relation involving arbitrary elements in an associative ring together with arbitrary (unknown) functions. The goal of the general FI theory is to describe these functions, or, when this is not possible, to describe the structure of the ring admitting the FI in question. This abstract theory has turned out to be a powerful tool for solving a variety of problems in ring theory, Lie algebras, Jordan algebras, linear algebra, and operator theory.

The book is divided into three parts. Part I is an introductory one. Part II is the core of the book. It gives a full account of the general FI theory, which is based on the concept of a d-free set; various constructions and concrete examples of d-free sets are given, and FI’s on d-free sets are thoroughly studied. Part III deals with applications. Its main purpose is to demonstrate how one can find FI’s when considering different problems, and then effectively use the general theory exposed in Part II. Perhaps the most illuminating example of the applicability are solutions of long-standing Herstein’s conjectures on Lie homomorphisms and Lie derivations - in the proofs practically the entire FI theory is used.