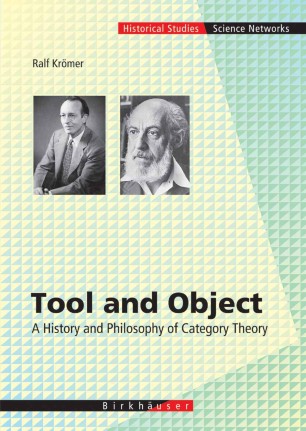 A History and Philosophy of Category Theory

The book is first of all a history of category theory from the beginnings to A. Grothendieck and F.W. Lawvere. Category theory was an important conceptual tool in 20th century mathematics whose influence on some mathematical subdisciplines (above all algebraic topology and algebraic geometry) is analyzed. Category theory also has an important philosophical aspect: on the one hand its set-theoretical foundation is less obvious than for other mathematical theories, and on the other hand it unifies conceptually a large part of modern mathematics and may therefore be considered as somewhat fundamental itself. The role of this philosophical aspect in the historical development is the second focus of the book. Relying on the historical analysis, the author develops a philosophical interpretation of the theory of his own, intending to get closer to how mathematicians conceive the significance of their activity than traditional schools of philosophy of science.

The book is the first monography exclusively devoted to the history of category theory. To a substantial extent it considers aspects never studied before. The author uses (and justifies the use of) a methodology combining historical and philosophical approaches. The analysis is not confined to general remarks, but goes into considerable mathematical detail. Hence, the book provides an exceptionally thorough case study compared with other works on history or philosophy of mathematics. The philosophical position developed here (inspired by Peircean pragmatism and Wittgenstein) is an interesting alternative to traditional approaches in philosophy of mathematics like platonism, formalism and intuitionism.

“Krömer provides a more complete historical study of category theory and its applications from the beginnings to about 1970. … It caught the attention of people interested in conceptual and philosophical issues … . I recommend Krömer’s work highly to anyone who seeks to gain an understanding of category-theoretic mathematics … . an interesting contribution to the historical philosophy of mathematical practice … . the book is more successful as a history. It is well produced, and the English is clear enough … .” (José Ferreirós, Zeitschrift für Geschichte der Wissenschaften, Technik und Medizin, Issue 1, 2010)
Buy options