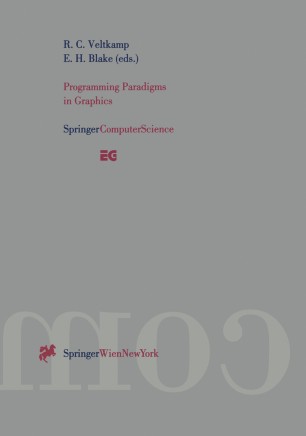 Proceedings of the Eurographics Workshop in Maastricht, The Netherlands, September 2–3, 1995

The papers in this volume are a good sampling and overview of current solutions to the problems of creating graphically based systems. This breadth of scope comes out of the closing discussion at the Fourth Eurographics Workshop on Object-Oriented Graphics. The fifth workshop, on Programming Paradigms in Graphics, set out to provide answers and alternatives to the shortcomings of object-oriented graphics. The presentations investigated the applicability, merits and problems of various programming paradigms in computer graphics for design, modelling and implementation. This book contains a revised selection of the best papers from the Fifth Eurograph­ ics Workshop on Programming Paradigms in Graphics, held 2-3 September 1995 in Maastricht, The ~etherlands. All papers at the workshop were subjected to a thorough review by at least three members of the international programme committee. The se­ lection for this book was based on further review and the papers also incorporate the relevant aspects of the discussions at the workshop. In past Eurographics workshops on Object-Oriented Graphics the prominent trend has been a discovery of the limits of object-orientation in graphics. The limitations of object-orientation were felt to lie in such areas as the expression of relationships between objects. This is an area of particular strength for the declarative languages, such as constraint-based languages. On the other hand, a notion of state has long been a problem in declarative languages and yet it is often seen as an essential aspect of graphical modelling, particularly in simulation and animation.