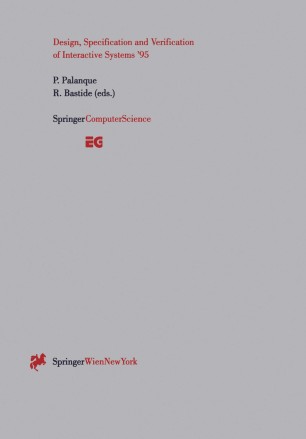 Proceedings of the Eurographics Workshop in Toulouse, France, June 7–9, 1995

This book is the final outcome of the Eurographics Workshop on Design, Specification and Verification of Interactive Systems, that was held in Bonas, from June 7 to 9, 1995. This workshop was the second of its kind, following the successful first edition in Italy in 1994. The goal of this ongoing series of meetings is to review the state of the art in the domain of tools, notations and methodologies supporting the design of Interactive Systems. This acknowledges the fact that making systems that are friendlier to the user makes the task ever harder to the designers of such systems, and that much research is still needed to provide the appropriate conceptual and practical tools. The workshop was located in the Chateau de Bonas, in the distant countryside of Toulouse, France. Tms location has been selected to preserve the quiet and studious atmosphere that was established in the monastery of Santa Croce at Bocca di Magra for the first edition, and that was much enjoyed by the participants. The conversations initiated during the sessions often lasted till late at night, in the peaceful atmosphere of the Gers landscape.