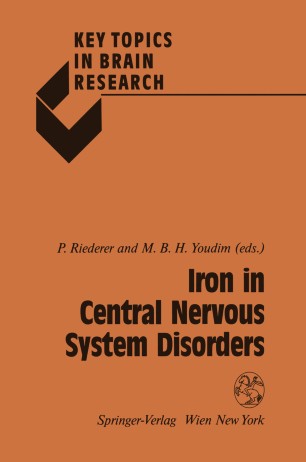 The role of the metals copper, zinc, magnesium, lead, manganese, mercury, lithium and aluminium in neuropsychiatric disease are well known and has been discussed on several occasions. Yet little attention has been paid to iron, the most abundant transitional metal in the body and the earth's crust. Iron plays a major role as a cofactor of numerous metabolic enzymes, it is important for DNA and protein synthesis, and has a crucial role in the oxygen carrying capacity of haemoglobin. Some of the most devastating diseases of systemic organs are associated with abnormal iron metabolism. Yet only very recently its role in the central nervous system has been considered. Thus nutritional iron defi­ ciency and iron overload afflict some 500-600 million people. It is also well recognized that too little or too much iron can produce profound effects on the metabolic state of the cell, and therefore the regulation of iron uptake and disposition is tightly relegated by the cell. Its transport into the cell and storage are handled by transferrin, ferritin and haemo­ siderin. Nowhere are these processes so well recognized as in the case of brain iron metabolism. Iron does not have ready access to the adult brain as it does to other tissues, since it does not cross the blood brain barrier (BBB). All the iron present in brain is deposited before the closure of BBB at an early age where it is sequestered and conserved. Therefore its turnover is extremely slow.