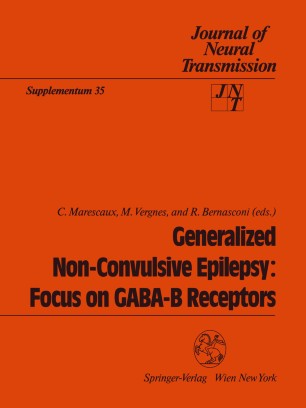 Generalized non convulsive epilepsy (GNCE), also called absence or petit mal epilepsy, is a disease appearing during childhood. EEG, clinical, pharmacological and genetic characteristics differ from those of convulsive or focal epilepsies. No underlying structural or biochemical abnormality has been identified for generalized absence seizures and the etiology of this disorder is unknown. It is unlikely that the precise pathophysiology of GNCE can be resolved in studies that focus on humans. Therefore a number of animal models reproducing the human disease have been developed. The aim of this supplementum is to characterize such models in rodents. First, recent models are extensively described. These include the genetic model of spontaneous GNCE in Strasbourg's Wistar rats and in tottering mice as well as bilateral spike and wave discharges induced by GHB, PTZ or GABA mimetics. Second, this supplementum will also provide very recent information on putative mechanisms underlying generalized absence seizures. Third, various experimental approaches aimed at investigating the neural substrate of this particular kind of epilepsy are described with various electrophysiological, pharmacological, biochemical, metabolic, ionic and molecular data. This supplementum provides an original multidisciplinary approach to the mechanisms involved in GNCE and demonstrates that rodent models are a promising tool which complements the classical feline penicillin model.