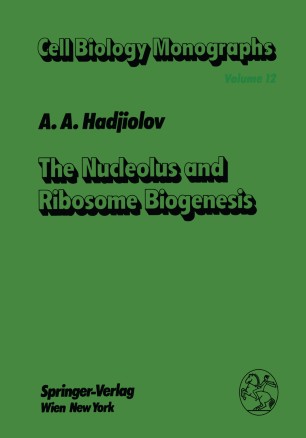 The nucleolus had consistently attracted the attention of investigators in the fields of cell biology and pathology. Because of its ubiquitous presence in the nucleus of eukaryotic cells, its rapid changes during their life cycle, and its rapid response to noxious agents, this organelle has been the subject of a large number of studies. Yet, the exact function and the very reason for the existence of the nucleolus (the only large cellular structure not delimited by a membrane) remain largely unknown. The ribosomes were discovered relatively late in the study of cells, but due to their crucial involvement in the protein synthesis machinery of all living organisms, the elucidation of their structure and function quickly became one of the major goals of molecular biology. The relatively simple structure of the ribosome strengthens the hope that a full understanding of the structure and function of this organelle in molecular terms is within the reach of contemporary research~ Since each of the rRNA and protein molecules embodied in the ribosome is the product of a distinct gene, studies on the biogenesis of ribosomes expanded rapidly to become a core topic in molecular genetics.