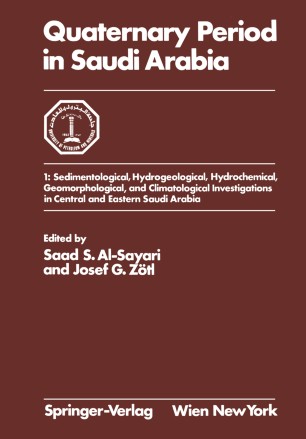 The publication of this first volume on the Quaternary Period in Saudi Arabia marks a significant milestone in the study of this Kingdom's basic geology. It also represents a major achievement in international cooperation in scholarship. The study of the Quaternary Period of Saudi Arabia was first proposed by Austrian scientists and by the officers of the Austrian Academy of Sciences early in 1972. A meeting was arranged between representatives of that Academy and of the University of Petroleum and Minerals, in Vienna, during May and June of that year, and tentative agreement was reached on the details of this cooperative venture. An exchange of letters, 15th June 1972 from the Austrian Academy of Sciences and 21th June 1972 from the Uni­ versity of Petroleum and Minerals, formally recorded the basis of the agree­ ment and arranged for the first visit to Saudi Arabia of the initial research team and accompanying officials from Austria. This team was headed by Professor Dr. JOSEF ZOTL, of the Department for Hydrogeology, Technical University of Graz, the initial project director. Many scientists, administrators, and officials have contributed to the success of this fundamental research project. Their number is too extensive to mention in this Foreword, but the principal contributors have been listed in the body of this text in conjunction with the specific areas of investigation in which they participated. The enormous contribution of Professor Dr. ZOTL, however, merits exceptional commendation.