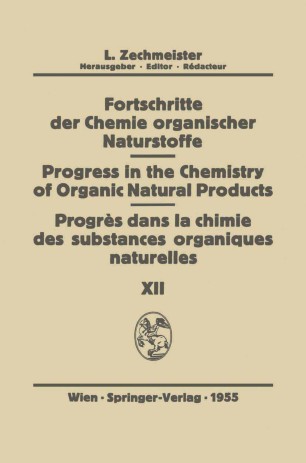 Substances belonging to this group of organic compounds are wi,lely distributed in Nature, being found in plants, both higher and lower fungi and, upto the present time, in one animal source, sheep wool-fat. For a long­ time no real differentiation was possible between the tetra- and penta­ cyclic triterpenes and the sterols. Then the two latter became disting­ uishable by their selenium. ·dehydrogenation products, i. e. , picene and naphthalene derivatives from the pentacyclic triterpenes and DIELS' hydrocarbon from the sterols. It is now apparent that those compounds yielding predominantly I: 2: 8-trimethylphenanthrene on dehydro­ genation represent yet another class, and this property is regarded as typical of the tetracyclic triterpenes. The group contains both C and C 30 3l compounds and, although the latter fall outside RUZICKA'S strict definition of triterpenes (I42), it seems desirable to permit this deviation. Members with thirty-two carbon atoms may well be discovered in due course. In a most· valuable account of the triterpenes written in I949, JEGER. (II3) was able to summarize all that was known about the tetra­ cyclic group in a very small compass. Most of the work discussed in the present article has been published during the last five years and in that time the structures of some twenty compounds have been elucidated. Of outstanding importance is the revelation of close structural relation­ ships tQ the steroids, and the presence of C and C side-chains, skeletally 8 9 identical with those of cholesterol and ergosterol.