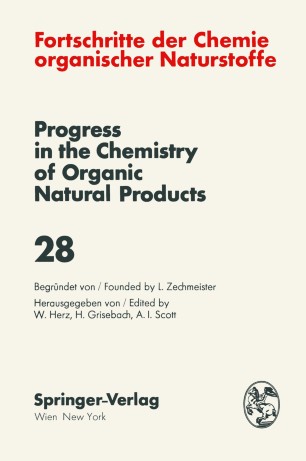 The cyanogenic glycosides, here defined as glycosidic derivatives of iX-hydroxynitriles, represent a rather limited class of natural products, which are widely distributed in the plant kingdom and, to a small ex­ tent, even in animals. A characteristic feature of these glycosides is their ability to release hydrocyanic acid on treatment with dilute acids or appropriate enzymes. The term "cyanogenic" is used to designate this property, regardless of whether pure substances, plants, or animals, are serving as the source. In the latter cases the term "cyanophoric" is occasionally employed synonymously. Cyanogenesis in plants was probably first discovered by SCHRADER in 1803 (Io3) working with bitter almonds. In 1830, ROBIQUET and BOUTRON-CHARLARD (IOO) succeeded in isolating the parent glycoside, namely amygdalin. Over the years, a total of 18 cyanogenic glycosides have been isolated and characterized more or less completely (Table I, p. 76). It will be noted that the majority of these compounds has been isolated in the era of classical organic chemistry and that progress in .discovering new compounds, not to mention new structural types, has been surprisingly slow. It is worth remembering here that the mechanism ·of cyanogenesis has been established only in the minority of known cyanogenic species. The cyanogenic glycosides have last been reviewed in 1958 by DILLE­ MANN (36). Since then, no complete reviews in this field have appeared. It is the purpose of the present article to survey the more recent ad­ vances and, hopefully, to stimulate continued interest in these interesting .compounds.