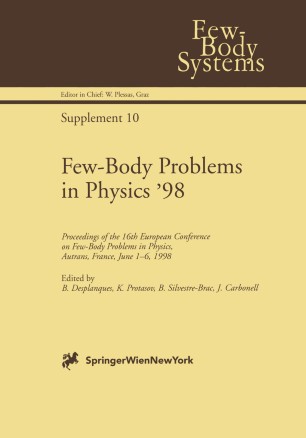 The sixteenth European Conference on Few Body Problems in Physics has taken place from June 1 to June 6, 1998, in Autrans, a little village in the mountains, close to Grenoble. The Conference follows those organized in Peniscola (1995), Amsterdam (1993), Elba (1991), Uzhgorod (1990) ... The present one has been organized by a group of physicists working in different fields at the University Joseph Fourier of Grenoble who find in this occasion a good opportunity to join their efforts. The core of the organizing committee was nevertheless located at the Institut des Sciences Nucleaires, whose physicists, especially in the group of theoretical physics, have a long tradition in the domain. The Few Body Conference has a natural tendency to be a theoretical one - the exchange about the methods used in different fields is the common point to most participants. It also has a tendency to be a hadronic physics one - the corresponding physics community, perhaps due to the existence of experimen­ tal facilities devoted to the study of few body systems, is better organized. In preparing the scientific program, we largely relied on the advices of the Inter­ national Advisory Committee, while avoiding to follow these trends too closely.