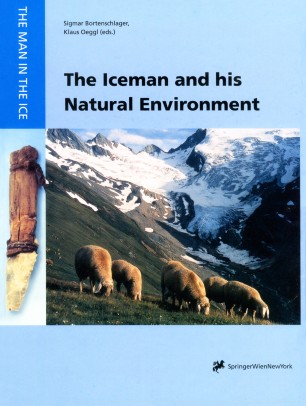 The Iceman and his Natural Environment

Before the discovery of the "Man in the Ice" in temporal context. On the other hand the reconstruc­ tion of the Iceman's life-style as derived from data September 1991, little was known about the Neolithic obtained from the site has to be correlated with inde­ period in the Central Alps. Suddenly and without precedent, here was the very well preserved corpse of pendent data sets. For that purpose pollen analysis was a man who had lived more than 5,000 years ago with his performed on peat-bogs in the vicinity of the find and clothing and equipment almost intact. The discovery further afield to obtain precise data on the vegetation was not just deservedly a world-wide sensation but a cover and climate in the Neolithic. Pollen analysis was unique opportunity for the scientific community to in­ performed for a vertical transect extending from the vestigate the life and death of a human from such very timber line almost up to the nival zone. The results of ancient times. It opened up wholly new horizons in the analyses reveal changes to the vegetation patterns prehistoric research, and with the help of a full range caused by pastoral farming long before the time of the of modern research techniques an attempt was made Iceman.