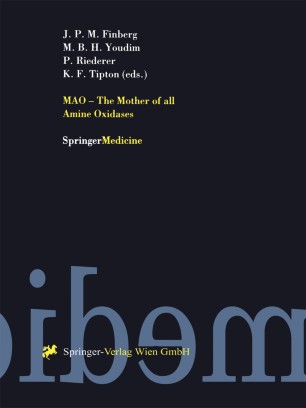 MAO — The Mother of all Amine Oxidases

Monoamine oxidase (MAO) is linked to psychiatric and neurological disorders, because inhibitors of the enzyme are used clinically for treatment of affective disorders and Parkinson’s disease. One of the interesting new aspects of MAO is the occurrence in the human population of deletions of genes coding for one or the other enzyme subtype (A or B). This leads to the possibility of a genetic basis for psychiatric disorders based on MAO. Subjects with deletions of type A or B, and combined deletions, have been described. In the first group of 6 papers in this book, the occurrence and characterization of these phenotypes, as well as the structure of MAO genes, is explored. Advances in the biochemistry of MAO subtypes and their physiological function and localization in brain and periphery is included. Other sections of the book deal with the neuroprotective action of MAO inhibitors and their pharmacology, especially the pharmacology of new MAO-B inhibitors.

"... the book is of particular value and a rich source of information for basic neuroscientists in the field. But it also can be of substantial interest to the rest of the neuroscientific community to get a glimpse of the current status of research in the field of MAO.” Acta Neurologica Belgica
Buy options