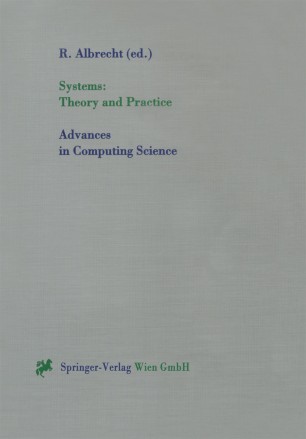 Part of the Advances in Computing Science book series (ACS)

There is hardly a science that is without the notion of "system". We have systems in mathematics, formal systems in logic, systems in physics, electrical and mechanical engineering, architectural-, operating-, infonnation-, programming systems in computer science, management-and PJoduction systems in industrial applications, economical-, ecological-, biological systems, and many more. In many of these disciplines formal tools for system specification, construction, verification, have been developed as well as mathematical concepts for system modeling and system simulation. Thus it is quite natural to expect that systems theory as an interdisciplinary and well established science offering general concepts and methods for a wide variety of applications is a subject in its own right in academic education. However, as can be seen from the literature and from the curricula of university studies -at least in Central Europe-, it is subordinated and either seen as part of mathematics with the risk that mathematicians, who may not be familiar with applications, define it in their own way, or it is treated separately within each application field focusing on only those aspects which are thought to be needed in the particular application. This often results in uneconomical re-inventing and re-naming of concepts and methods within one field, while the same concepts and methods are already well introduced and practiced in other fields. The fundamentals on general systems theory were developed several decades ago. We note the pioneering work of M. A. Arbib, R. E. Kalman, G. 1. Klir, M. D.