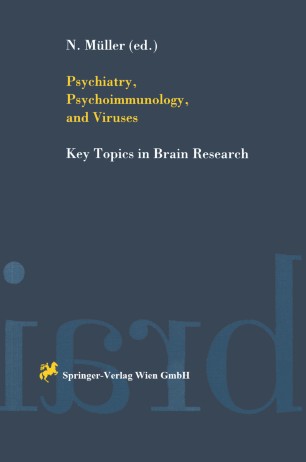 This volume contains the contributions to the "3rd Expert Meeting in Psychoneuroimmunology", held in Munich, Germany in autumn 1997. Clinical psychiatrists, neuroscientists and researchers in basic immuno­ logy from Europe and the USA gather together annually at this new tra­ ditional meeting to discuss new findings and trends in the relationship between psychiatric disorders and the immune system. Pinpointed at the Munich meeting in particular were the possible influence of viral infec­ tions on psychiatric disorders, especially schizophrenia, and the possible pathophysiological mechanisms affecting psychiatric disorders. These mechanisms include viral-induced alteration, cytokine production, and the role of the HLA system. One chapter is devoted to the influence of viral infections during pregnancy; another to the first results of experimental therapy especial­ ly regarding the immune system. The immunological aspects not only of schizophrenia but also of depression, anxiety disorders, sleep and headache were also discussed at the meeting, and two further chapters cover methodological aspects related to clinical and experimental pitfalls in psychoneuroimmunology. The psychoneuroimmunology of psychiatric disorders is a rapidly expanding field, and research is increasing on the therapeutic aspects. This is reflected by one of the main themes of the "4th Expert Meeting in Psychoneuroimmunology", jointly held in autumn 1998 in Bethesda, Maryland, USA, with the Stanley Foundation Meeting in Neurovirology, devoted to therapeutic strategies deriving from psychoneuroimmunolo­ gical findings. The "5th Expert Meeting in Psychoneuroimmunology" will be held in 1999 in Innsbruck, Austria.