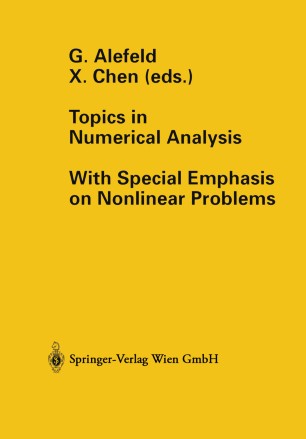 With Special Emphasis on Nonlinear Problems

This volume contains eighteen papers submitted in celebration of the sixty-fifth birthday of Professor Tetsuro Yamamoto of Ehime University. Professor Yamamoto was born in Tottori, Japan on January 4, 1937. He obtained his B. S. and M. S. in mathematics from Hiroshima University in 1959 and 1961, respec­ tively. In 1966, he took a lecturer position in the Department of Mathematics, Faculty of General Education, Hiroshima University and obtained his Ph. D. degree from Hiroshima University two years later. In 1969, he moved to the Department of Applied Mathematics, Faculty of Engineering, Ehime University as an associate professor and he has been a full professor of the Department of Mathematics (now Department of Mathematical Sciences), Faculty of Science, since 1975. At the early stage of his study, he was interested in algebraic eigen­ value problems and linear iterative methods. He published some papers on these topics in high level international journals. After moving to Ehime University, he started his research on Newton's method and Newton-like methods for nonlinear operator equations. He published many papers on error estimates of the methods. He established the remarkable result that all the known error bounds for Newton's method under the Kantorovich assumptions follow from the Newton-Kantorovich theorem, which put a period to the race of finding sharper error bounds for Newton's method.