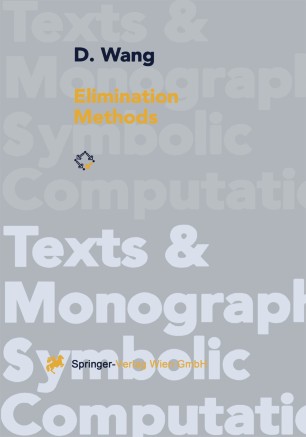 The development of polynomial-elimination techniques from classical theory to modern algorithms has undergone a tortuous and rugged path. This can be observed L. van der Waerden's elimination of the "elimination theory" chapter from from B. his classic Modern Algebra in later editions, A. Weil's hope to eliminate "from algebraic geometry the last traces of elimination theory," and S. Abhyankar's sug­ gestion to "eliminate the eliminators of elimination theory. " The renaissance and recognition of polynomial elimination owe much to the advent and advance of mod­ ern computing technology, based on which effective algorithms are implemented and applied to diverse problems in science and engineering. In the last decade, both theorists and practitioners have more and more realized the significance and power of elimination methods and their underlying theories. Active and extensive research has contributed a great deal of new developments on algorithms and soft­ ware tools to the subject, that have been widely acknowledged. Their applications have taken place from pure and applied mathematics to geometric modeling and robotics, and to artificial neural networks. This book provides a systematic and uniform treatment of elimination algo­ rithms that compute various zero decompositions for systems of multivariate poly­ nomials. The central concepts are triangular sets and systems of different kinds, in terms of which the decompositions are represented. The prerequisites for the concepts and algorithms are results from basic algebra and some knowledge of algorithmic mathematics.

"... the algorithms are presented in a ‘crescendo’ sequence, that is, the versions are improved step by step with the introduction of new techniques and concepts, which allows the readers to follow the construction of the ideas; furthermore, this style makes it a very good textbook ... it is a very good text to have on hand for anyone interested in the theories and techniques of elimination methods.” American Mathematical Society "... This book, therefore, is not only topical, but is also the first book that contains all major currently available algorithmic approaches on elimination theory in one conceptional frame ... The book is well suited both as a textbook and as a research reference for the state of the art in algorithmic elimination theory. Theorems and proofs are presented in such a way that the correctness of the algorithms based on them can easily be verified. Well-chosen examples make it easy to understand the concepts and the methods. The main contents of this book - altough not all details - should enter standard curricula on algebra." Association for Computing Machinery
Buy options