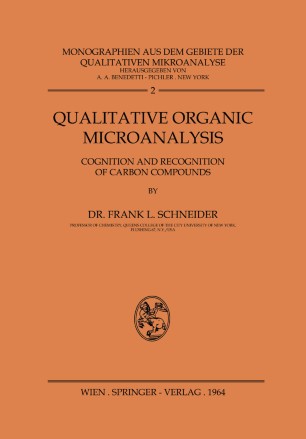 Cognition and Recognition of Carbon Compounds

The most important task of the analytical chemist, aside from the acquisition of experimental data, is the coordination and interpretation of such data in terms of the qualitative and quantitative composition of the test substance. As in the old tale of the blind men and the elephant, a single observation or test, not considered in conjunction with others, may lead to entirely erroneous conclusions. On the other hand, mere in­ crease in the number of such tests, without regard to their need or to their relationship to each other, also may not suffice for drawing the correct inferences from the experimental evidence. The deductive reasoning which is usually associated with the analy­ tical chemist finds its greatest opportunity for application in the problems of cognition and recognition of carbon compounds. Since a rigid scheme of procedure tends to produce a corresponding rigidity of thought, the intent of the present book is to outline approaches which will minimize the chances of misinterpretation without restricting the analytical chemist in his choice of tests. The selection of subsequent tests or reactions should be governed by the results of the preceding ones rather than by an arbi­ trary list. The relationships of the various approaches (and the information derived from each) to the composition and constitution of the test sub­ stance are brought out in the discussion with the hope that they may serve as guide lines for such selection.