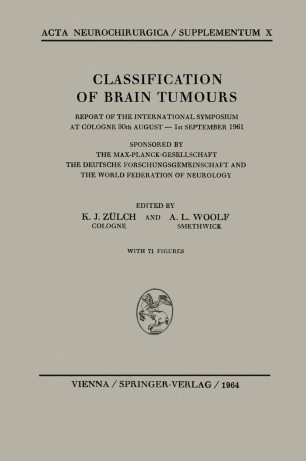 The report which follows constitutes the proceedings of a sym­ posium on the classification of brain tumours held in Cologne in 1961. It contains the contributions and discussions reported as far' as possible in a word-for-word manner, in the hope not only of providing out of the thoughts of the participants stimulation for further research, but also to indicate the atmosphere which prevailed during the symposium in which many completely opposed views were able to be expressed without any feeling of embarrassment. This freedom of expression is already obvious in the discussion of a proposed classification of brain tumours for the Unio Internationalis Contra Cancrum (UICC). The symposium endeavoured here to pro­ duce a positive criticism in order to arrive at a significant and practical conclusion viz a general, internationally acceptable classi­ fication. It was necessary to accept a degree of compromise even if the classification suggested did not in every point correspond to all the personal views of the various participants. The second part of the symposium was concerned with a critical discussion of numerous brain tumour problems, for example the scientific delineation of tumour groups; the discussion was started by general reviews on the biology of brain tumours so that the later discussion could cover as wide a ground as possibly. Here also we all felt that a great stimulus for future work arose from the discussion.