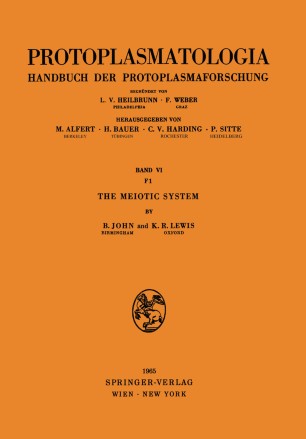 Introduction When the study of heredity and variation first came to be treated as a scientific subject-and this, one must remember, was only just over a hundred years ago-there was an unfortunate separation between the disciplines of cytology and experimental breeding. This separation was based partly on a lack of understanding and partly on a lack of the desire to understand. Even WILLIAM BATESON, the first apostle of mendelism in England, had a blind spot for cytology and for many years dogmatically refused to believe that MENDEL'S determinants were transmitted and distributed by the chromosomes. This separation between cytology and experimental breeding is one which persists, in a measure, even today, simply because there are two quite different, though complementary, techniques available for the study of heredity and variation. On the one hand, one can study directly the structure and behaviour of the actual vehicles which transmit the genetic determinants from one generation to the next. This is the method employed by those who study genetics through a microscope. The alternative method is that used by the experimental breeder who, in default of being able to watch the hereditary factors segregate from each other directly, is obliged to examine the constitution of the germ cells indirectly by sampling, and usually at random, the products of a controlled mating.