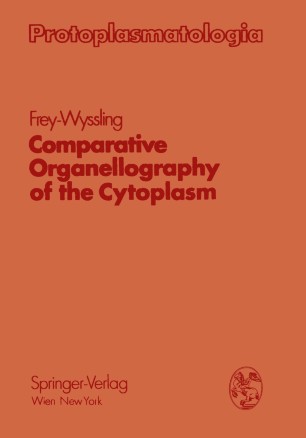 Comparative Organellography of the Cytoplasm

Since the publication of my monograph "Die submikroskopische Struktur des Cytoplasm as" [Protoplasmatologia III A12 (1955)], science has increased our knowledge on this cell constituent in an amazing way. At that time, cytoplasm was still considered as an amorphous colloid with an amicroscopic structure capable of sol/gel transformations. Meanwhile, within the past 18 years, ultrastructure research and molecular biology have shown that it consists of structured organelles, thereby revolutionizing our concept of the cytoplasm. There is an ontogeny of these organelles which deals with their appearance, development, growth and eventual disappearance. Although the results of relevant studies are less spectacular at this time than those concerning nucleic acids, they will become more and more important in the near future, because they touch the basic question of how molecular morphogenesis is realized. Therefore, an attempt is made to portray the actual state of these problems from a biological point of view which involves a comparison of the established organelles. I thank Miss SONIA TURLER and Dr. ELsA HAUSERMANN for their help with the manuscript and my former pupils and assistants Drs. Kopp, KUHN, SCHWARZENBACH, STAEHELIN, STEINMANN, and VOGEL, as well as my colleagues Professors MATILE, MooR, and MUHLETHALER for original electron micro­ graphs.