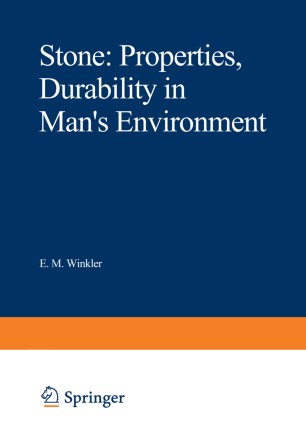 As one of the most widely accessible building materials available to man, natural stone has been in extensive use for many centuries. It is a significant component, andin places the only one, of man-made structures the world over, and its properties, applications, and behavior over long periods of time constitute a story that is almost unbelievably complex. Important elements of the story are described and interrelated in this volume. That the exposed parts of the earth's crust provide a considerable variety of rock types is evident to any thoughtful observer. To the geologist falls the task of characterizing and explaining this variety, but many other kinds of specialists who are involved in the commercial use of stone also have an essential stake in the matter. From quarryman to mason, from architect to structural engineer, and certainly from purchaser to future observer, there is compelling interest in the nature, appearance, and durability of one stone as compared with another, or of stone as compared with some other material. Small wonder, then, that much has been written on the subject, and that numerous aspects of commercial stone and its properlies have appealed to a host of investigators. Research in this area also has been an official concern of many organizations, which in the United States include the American Society for Testing and Materials, the National Bureau of Standards, the U. S. Bureau of Mines, the U. S. Geological Survey, and several state agencies.