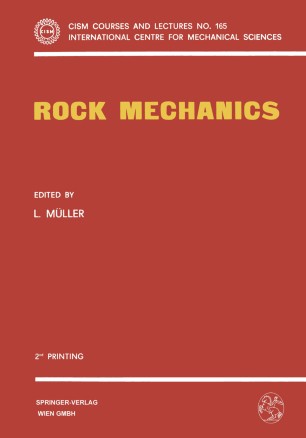 Much of the research on fracture of rocks or rock-like materials conducted over the past two decades may be considered as "academic studies" of the general phenomenon of fracture. Yet, the understanding of this phenomenon is fundamental if a material is used in any engineering design, whether the aim is to prevent failure of the structure or to promote it. Fracture theories existing are generally empirical and derived from experimental results of laboratory test with simple boundary conditions. Because of the basic weakness of rock intension and because in general the environmental stresses in rock mechanics are compressive most of these theories consider fracture under compressive stress conditions. The Coulomb-Navier-, the Mohr-, the Griffith and the McClintock and Walsh criteria are typical examples and will be considered in the following. In addition the tendency during the past was in making accurate experiments under conditions of homogeneous stresses. To obtain information about the fracture behaviour with unequal principal stresses systems have to be used which involve inhomogeneous stresses. This case is of particular interest, since in practical rock mechanics we may expect conditions of highly inhomogeneous stresses. However, a consideration of such situations involve additional assumptions like the applicability of the theory of elasticity for calculating the stress field, which may be open to question. A distinction has to be made between fracture initiation and fracture propagation, since a detailed observation of the total fracture process in rock was possible by means of "stiff" and "servo-controlled" loading systems.