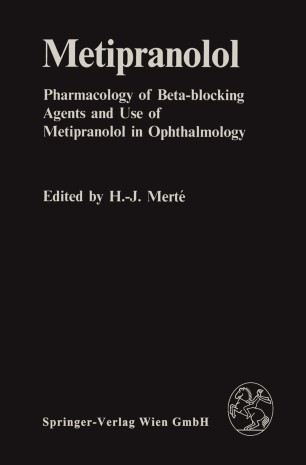 Pharmacology of Beta-blocking Agents and Use of Metipranolol in Ophthalmology

After a compound and its various effects - or, as the case may be, any particular one of these - have been discovered there is still a long way ahead until it is available for use in daily practice as a finished product. Before reaching the doctor, the substance is examined by chemists, pharmacologists and pharmacists - just to mention a few of the most important stages in a whole research sequence. Before the drug is finally made available on the market, the findings resulting from animal experiments must be confirmed in clinical studies. The expectations involved in its development must be met, and sufficient evidence has to be established as to the drug's effects and side effects, indications and contraindications, and the questions of safe use and appropriate dosage. Only then may the drug be registered and introduced to the market. In this respect Metipranolol eye drops, which have recently been launched on the market, formed no exception and had likewise to go through all these various stages. A series of investigators at many different centers participated in this procedure, and at the invitation of the manufacturers, Messrs. Dr. Gerhard Mann, they assembled for discussions at a symposium held in Berlin in January 1983, and reported on the substance and their experiences with it.