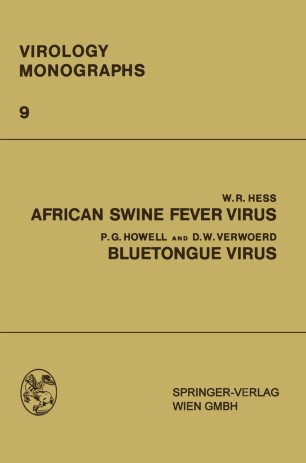 Bluetongue may be described as an acute insect borne disease of ruminants, manifested clinically in sheep by a catarrhal inflammation of the mucous mem­ branes of the digestive and respiratory systems and associated with degenerative changes in the skeletal musculature. The profound emaciation and weakness which follow the acute disease are responsible for a protracted convalescence and for serious economic losses due to diminished productivity. II. Historical During the early colonisation of Africa, susceptible Merino and other European breeds of sheep were introduced into the Cape, at first by the Dutch East India Company between 1652 and 1785 and again later in 1870. A report of the Cattle and Sheep Diseases Commission (1876) records the appearance of a serious febrile disease amongst these imported sheep in which both morbidity and mortality was high (cited by HENNING, 1949). HuTCHEON (1881) gave this disease the name of "Fever" or "Epizootic Catarrh", in order to distinguish it from other clinical conditions of a similar nature encountered amongst sheep. In the first com­ prehensive description of this clinical syndrome and its epizootiology HuTCHEON (1902) referred to it as "Malarial Catarrhal Fever of Sheep", a designation which was obviously influenced by the mistaken belief that an intracorpuscular parasite was the primary cause of the disease. More systematic studies were conducted by SPREULL (1902; 1905), who endeavoured to immunize sheep by the simultaneous inoculation of immune serum and infective blood.