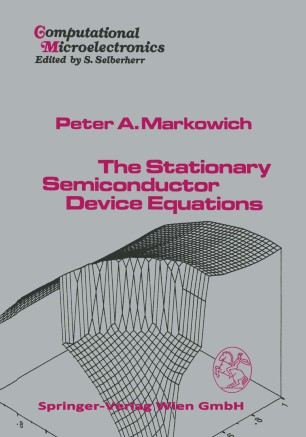 In the last two decades semiconductor device simulation has become a research area, which thrives on a cooperation of physicists, electrical engineers and mathe­ maticians. In this book the static semiconductor device problem is presented and analysed from an applied mathematician's point of view. I shall derive the device equations - as obtained for the first time by Van Roosbroeck in 1950 - from physical principles, present a mathematical analysis, discuss their numerical solu­ tion by discretisation techniques and report on selected device simulation runs. To me personally the most fascinating aspect of mathematical device analysis is that an interplay of abstract mathematics, perturbation theory, numerical analysis and device physics is prompting the design and development of new technology. I very much hope to convey to the reader the importance of applied mathematics for technological progress. Each chapter of this book is designed to be as selfcontained as possible, however, the mathematical analysis of the device problem requires tools which cannot be presented completely here. Those readers who are not interested in the mathemati­ cal methodology and rigor can extract the desired information by simply ignoring details and proofs of theorems. Also, at the beginning of each chapter I refer to textbooks which introduce the interested reader to the required mathematical concepts.