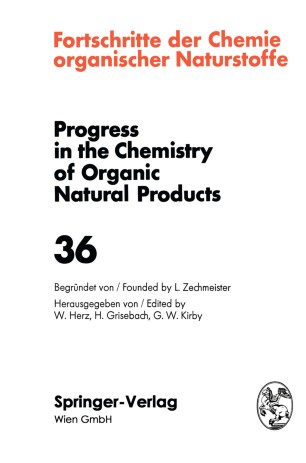 Since the late 1950's when proton n. m. r. spectroscopy was first used in organic natural products studies the technique has increasingly con­ of this important area of chemistry. tributed to the rapid advancement Although the potential utility of 13C n. m. r. was recognized very early, essentially no application of 13C n. m. r. appeared in the literature prior to 1966 and 95% of the existing data are less than five years old. The initially slow growth had its cause in inadequate instrumentation, insufficient sensitivity being the main obstacle. This situation drastically changed with the advent and commercial availability of broadband ex­ citation and Fourier transform methods, giving natural-abundance 13C n. m. r. and its numerous chemical applications a tremendous impetus. Today BC spectra can be recorded on sample quantities down to the submilligram level, which until recently even withstood proton n. m. r. Paralleling the development of experimental techniques considerable progress has also been made on an understanding of spectral parameters, in particular their stereochemical implications on natural products. Although the large majority of data present up to now deals with known structures, an adequate basis now exists which allows the chemist to use the technique for tackling real problems on unknown molecules.