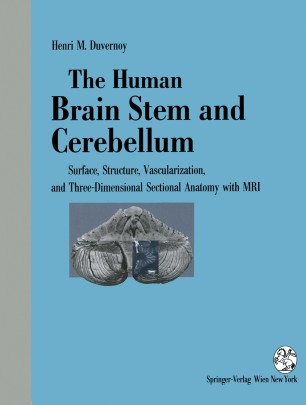 The Human Brain Stem and Cerebellum

This study of the brain stem and the cerebellum is the sequel to a previous study of the brain (cerebral hemispheres and diencephalon) [82]. The brain stem and cerebellum are dealt with here for the same purpose as was the brain in the previous work, i.e., to reach, step by step, knowledge that is comprehensive enough for an understanding of an atlas of sections and its clinical use. Following a brief survey of the methods used, the first chapter describes the brain stem and cerebellum surfaces as well as their location in the posterior cranial fossa. The second and the third chapter, respectively, describe the brain stem and cerebellum structures followed by brief surveys of their functions, enabling the reader to obtain an introductory view of the role of both the nuclei and fasciculi. The fourth chapter studies the brain stem vascular network in detail. Thus, this chapter sums up the results of research on brainstem superficial blood vessels and their intra­ nervous territories that were already presented in two previous works [79, 80]. By contrast, presentation of the cerebellar vascularization follows the previous literature.

"... For those in training in neuroradiology, neurosurgery and neurology this book is excellent ... I will refer to it constantly”. R. Paxton/Neuroradiology "... a thorough and excellent account of the anatomy of the brain stem and cerebellum ... an excellent reference and would be of great value to both trainees and senior surgeons”. British Journal of Neurosurgery
Buy options