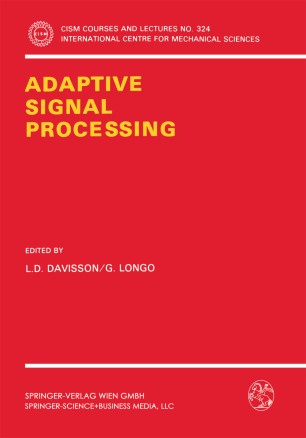 The four chapters of this volume, written by prominent workers in the field of adaptive processing and linear prediction, address a variety of problems, ranging from adaptive source coding to autoregressive spectral estimation. The first chapter, by T.C. Butash and L.D. Davisson, formulates the performance of an adaptive linear predictor in a series of theorems, with and without the Gaussian assumption, under the hypothesis that its coefficients are derived from either the (single) observation sequence to be predicted (dependent case) or a second, statistically independent realisation (independent case). The contribution by H.V. Poor reviews three recently developed general methodologies for designing signal predictors under nonclassical operating conditions, namely the robust predictor, the high-speed Levinson modeling, and the approximate conditional mean nonlinear predictor. W. Wax presents the key concepts and techniques for detecting, localizing and beamforming multiple narrowband sources by passive sensor arrays. Special coding algorithms and techniques based on the use of linear prediction now permit high-quality voice reproduction at remorably low bit rates. The paper by A. Gersho reviews some of the main ideas underlying the algorithms of major interest today.