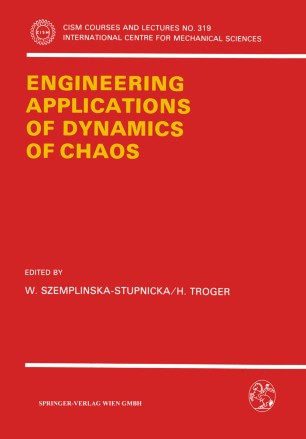 Engineering Applications of Dynamics of Chaos

The treatment of chaotic dynamics in mathematics and physics during last two decades has led to a number of new concepts for the investigation of complex behavior in nonlinear dynamical processes. The aim the CISM course Engineering Applications of Dynamics of Chaos of which this is the proceedings volume was to make these concepts available to engineers and applied scientists possessing only such modest knowledges in mathematics which are usual for engineers, for example graduating from a Technical University. The contents of the articles contributed by leading experts in this field cover not only theoretical foundations and algorithmic and computational aspects but also applications to engineering problems. In the first article an introduction into the basic concepts for the investigation of chaotic behavior of dynamical systems is given which is followed in the second article by an extensive treatment of approximative analytical methods to determine the critical parameter values describing the onset of chaos. The important relation between chaotic dynamics and the phenomenon of turbulence is treated in the third article by studying instabilities various fluid flows. In this contribution also an introduction into interesting phenomenon of pattern formation is given. The fourth and fifth articles present various applications to nonlinear oscillations including roll motions of ships, rattling oscillations in gear boxes, tumbling oscillations of satellites, flutter motions of fluid carrying pipes and vibrations of robot arms. In the final article a short treatment of hyperchaos is given.