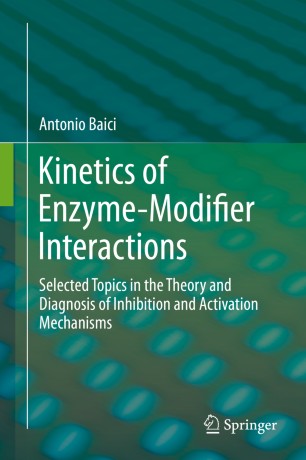 The kinetic mechanisms by which enzymes interact with inhibitors and activators, collectively called modifiers, are scrutinized and ranked taxonomically into autonomous species in a way similar to that used in the biological classification of plants and animals. The systematization of the mechanisms is based on two fundamental characters: the allosteric linkage between substrate and modifier and the factor by which a modifier affects the catalytic constant of the enzyme. Combinations of the physically significant states of these two characters in an ancestor-descendant-like fashion reveal the existence of seventeen modes of interaction that cover the needs of total, partial and fine-tuning modulation of enzyme activity. These interactions comprise five linear and five hyperbolic inhibition mechanisms, five nonessential activation mechanisms and two hybrid species that manifest either hyperbolic inhibition or nonessential activation characteristics depending on substrate concentration. Five essential activation mechanisms, which are taxonomically independent of the mentioned basic species, complete the inventory of enzyme modifiers. Often masked under conventional umbrella terms or treated as anomalous cases, all seventeen basic inhibition and nonessential activation mechanisms are represented in the biochemical and pharmacological literature of this and the past century, either in the form of rapid or slow-onset reversible interactions, or as irreversible modification processes.

The full potential of enzyme inhibitors and activators can only be appreciated after elucidating the details of their kinetic mechanisms of action exploring the entire range of physiologically significant reactant concentrations. This book highlights the wide spectrum of allosteric enzyme modification in physiological occurrences as well as in pharmacological and biotechnological applications that embrace simple and multiple enzyme-modifier interactions. The reader is guided in the journey through this still partly uncharted territory with the aid of mechanistically-oriented criteria aimed at showing the logical way towards the identification of a particular mechanism.