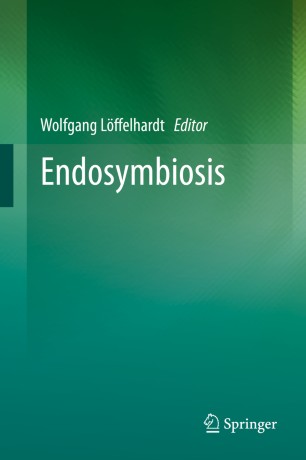 The origin of energy-conserving organelles, the mitochondria of all aerobic eukaryotes and the plastids of plants and algae, is commonly thought to be the result of endosymbiosis, where a  primitive eukaryote engulfed a respiring α-proteobacterium or a phototrophic cyanobacterium, respectively. While present-day heterotrophic protists can serve as a model for the host in plastid endosymbiosis, the situation is more difficult with regard to (the preceding) mitochondrial origin: Two chapters describe these processes and theories and inherent controversies. However, the emphasis is placed on the evolution of phototrophic eukaryotes: Here, intermediate stages can be studied and the enormous diversity of algal species can be explained by multiple secondary and tertiary (eukaryote-eukaryote) endosymbioses superimposed to the single primary endosymbiotic event. Steps crucial for the establishment of a stable, mutualistic relationship between host and  endosymbiont, as metabolic symbiosis, recruitment of suitable metabolite transporters, massive gene transfer to the nucleus, development of specific translocases for the re-import of endosymbiont proteins, etc. are discussed in individual chapters. Experts, dealing with biochemical, genetic and bioinformatic approaches provide insight into the state of the art of one of the central themes of biology. The book is written for graduate students, postdocs and scientists working in evolutionary biology, phycology, and phylogenetics.