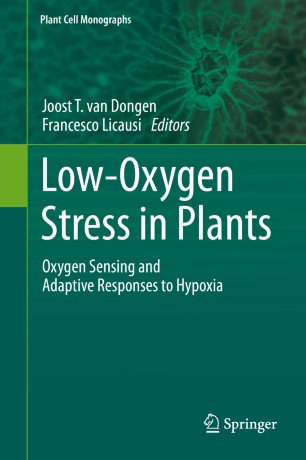 During the last ten years, knowledge about the multitude of adaptive responses of plants to low oxygen stress has grown immensely. The oxygen sensor mechanism has been discovered, the knowledge about the interaction network of gene expression is expanding and metabolic adaptations have been described in detail. Furthermore, morphological changes were investigated and the regulative mechanisms triggered by plant hormones or reactive oxygen species have been revealed. This book provides a broad overview of all these aspects of low oxygen stress in plants. It integrates knowledge from different disciplines such as molecular biology, biochemistry, ecophysiology and agricultural / horticultural sciences to comprehensively describe how plants cope with low oxygen stress and discuss its ecological and agronomical consequences. This book is written for plant scientists, biochemists and scientists in agriculture and ecophysiology.

Francesco Licausi studied Biotechnology at the University of Parma and Plant and Microbial Biotechnology at the University of Pisa in Italy. In 2010, he completed his Ph.D. at the Scuola Superiore Sant’Anna (Italy) and Potsdam University (Germany), defending a thesis on the characterization of members of the Ethylene Responsive Transcription Factor Family in response to low oxygen in plants. He worked as a postdoctoral researcher at the Max Planck Institute of Molecular Plant Physiology in Potsdam (Germany) until April 2011 before moving back to Italy to serve as Assistant Professor at the Scuola Superiore Sant’Anna. The research topics studied in Francesco’s group deal with the regulation of the molecular response to reduced oxygen availability in plants and the regulation of biosynthetic pathways involved in secondary metabolite production.