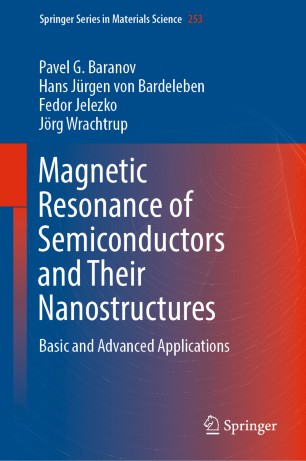 Magnetic Resonance of Semiconductors and Their Nanostructures

This book explains different magnetic resonance (MR) techniques and uses different combinations of these techniques to analyze defects in semiconductors and nanostructures. It also introduces novelties such as single defects MR and electron-paramagnetic-resonance-based methods: electron spin echo, electrically detected magnetic resonance, optically detected magnetic resonance and electron-nuclear double resonance – the designated tools for investigating the structural and spin properties of condensed systems, living matter, nanostructures and nanobiotechnology objects. Further, the authors address problems existing in semiconductor and nanotechnology sciences that can be resolved using MR, and discuss past, current and future applications of MR, with a focus on advances in MR methods.

The book is intended for researchers in MR studies of semiconductors and nanostructures wanting a comprehensive review of what has been done in their own and related fields of study, as well as future perspectives.

Pavel G. Baranov, born in the Orenburg region, Russia, is currently Professor, Head of the Microwave Spectroscopy of Crystals Laboratory in the Ioffe Institute, RAS, St Petersburg, Russia, and he is also affiliated to the Peter the Great Saint-Petersburg Polytechnic University. His research interests lie in the field of magnetic resonance, spin and magneto-optical quantum phenomena in condensed matter, including semiconductors, ionic compounds and based nanostructures; in the field of devices for radiofrequency spectroscopy.
Fedor Jelezko, born in Minsk, Belarus, is currently a full Professor and Director of the Institute for Quantum Optics at Ulm University, Germany, fellow of the Center for Integrated Quantum Science and Technology (IQST) at Ulm University and member of Heidelberg Academy of sciences. His research interests are at the intersection of fundamental quantum physics and application of quantum technologies for information processing, communication, sensing, and imaging.
Hans Jürgen von Bardeleben is the Directeur de Recherche at the Institut des Nanosciences de Paris-(INSP) of the Université Pierre et Marie Curie. He received his PhD in 1979 at the University Louis Pasteur in Strasbourg and then moved to the University Paris 6 &7 where he pursued his research in the Groupe de Physique  des Solides de l’ENS and since 2005 in the Institut des Nanosciences de Paris. His research interest is directed to semiconductor physics, spintronics materials and magnetic resonance spectroscopy.
Jörg Wrachtrup received his PhD from the Free University Berlin in 1994 and went on to become a research associate at the Technical University Chemnitz, from which he also received his Habilitation. Since 2000 he is Professor of Physics and Institute Director, 3rd Physical Institute, University of Stuttgart, and in 2010 he became a Max Planck Fellow at the Max Planck Institute for Solid State Research, Stuttgart.
Research interests: solid state quantum spintronics and quantum optics, nanoscale photonics, quantum limited metrology, and imaging methods in cellular biophysics.

“Everyone in related fields (beginners and experts, experimentalists and theorists, and scientists and engineers) can benefit from this book. … Plenty of helpful figures and tables are provided throughout the book. Many up-to-date references are listed at the end of each chapter if readers want to dig into more detail. … I highly recommend this book. Researchers who have just started working in the field would benefit from reading the whole book … .” (Gen Long, MRS Bulletin, Vol. 43 (2), February, 2018)
Buy options