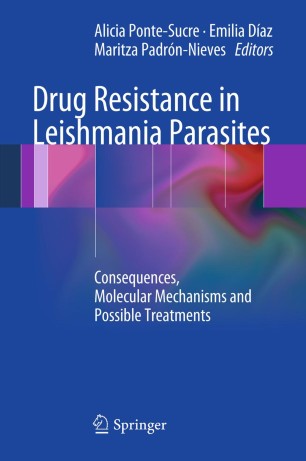 One of the main problems concerning therapeutic tools for the treatment of parasitic diseases, including leishmaniasis, is that some field parasites are naturally resistant to the classical drugs; additionally, current therapies may select parasites prone to be resistant to the applied drugs. These features are (at least partially) responsible for the disappointing persistence of the disease and resultant deaths worldwide. This book provides a comprehensive view of the pathology of the disease itself, and of parasitic drug resistance, its molecular basis, consequences and possible treatments. Scientists both from academic fields and from the industry involved in biomedical research and drug design, will find in this book a valuable and fundamental guide that conveys the knowledge needed to understand and to improve the success in combating this disease worldwide.

Emilia Diaz studied Pharmacy at the Central University of Venezuela (UCV) in Caracas and became Doctor of Sciences in Pharmacology in 2003 in the same university. From 1999 to 2003 she was Assistant Professor at the Chair of Biology, Faculty of Pharmacy, UCV. Currently she is Aggregate Professor of Human Physiology, Faculty of Medicine, UCV. Initially her research interests were related to the comprehension of the mechanisms involved in the diuretic and natriuretic action of adrenomedullin, and the role of the dopaminergic system in the adrenomedullin-induced diuresis and natriuresis. Recently her research interests are focused towards the comprehension of the mechanisms involved in proficiency and fitness in drug resistant Leishmania and in the initial interaction events (chemotaxis) occurring between Leishmania and its host cell.

Maritza Padrón Nieves studied Biology at UCV in Caracas and became Magister Scientiarum in Pharmacology in 1993 and Doctor of Sciences in Pharmacology in 2011 in the same university. From 1994 to 2000 she was head of the Department of Basic Sciences at the School of Nursery, UCV. Currently she is Aggregate Professor and head of the Human Pharmacology and Toxicology Chair, Faculty of Medicine, UCV. Initially her research interests were related to the comprehension of the mechanisms involved in digoxin intoxication. Recently she has dedicated her scientific interest to the identification and characterization of molecular markers of resistance in the Leishmania sp. infection model.

Alicia Ponte-Sucre studied Education in Biological Sciences at the Andrés Bello Catholic University in Caracas and became Magister Scientiarum in Physiology and Biophysics in 1981 at the Venezuelan Institute of Scientific Research and Doctor of Sciences in Pharmacology in 1993 at the UCV. She spent a year (1999-2000) at the University of Würzburg with a scholarship from the Alexander von Humboldt Foundation and was a staff scientist (2003-2007) at the same university, within a multidisciplinary project from the German Research Council. Currently she is Full Professor in Human Physiology and Coordinator for Scientific Affairs of the Faculty of Medicine, UCV.  Initially, her studies were focused on the physical-chemical behavior of black lipid membranes. Later, her scientific activity was oriented towards the characterization of receptors involved in air-way smooth muscle contraction. Recently her interests have been focused towards the study of parasite metabolism and membrane transporters essential for parasite survival and involved in drug resistance, and the mechanisms involved in cellular differentiation and parasite-host interaction in the Leishmania model. Additionally she has characterized natural products and target oriented designed compounds as potential therapeutic agents.