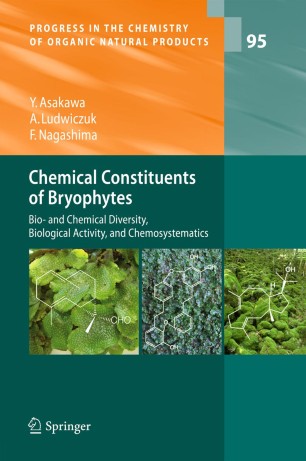 Part of the Progress in the Chemistry of Organic Natural Products book series (POGRCHEM, volume 95)

For some 50 years, Professor Asakawa and his group have focused their research on the chemical constituents of bryophytes and have found that these plants contain large numbers of secondary metabolites, such as terpenoids, acetogenins, and aromatic compounds representative of many new skeletons, which exhibit interesting biological activities. Individual terpenoids, when found as constituents of both a bryophyte and a higher plant, tend to occur in different enantiomeric forms. Professor Asakawa has covered the literature on bryophytes in two earlier volumes of Progress in the Chemistry of Organic Natural Products, namely, Volumes 42 (1982) and 65 (1995). Since the publication of the latter volume, a great deal of new information has appeared on bryophytes. One example is that known sex pheromones of algae have been discovered in two liverworts, indicating that some members of the latter taxonomic group might originate from brown algae. From information provided in this volume, it is suggested that two orders of the Marchantiophyta should be combined.