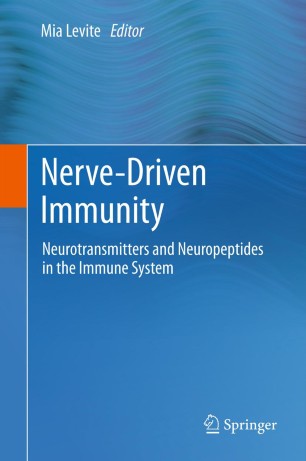 Neurotransmitters and Neuropeptides in the Immune System

The book includes many original figures, overview tables, and proposed models of events which are instrumental, enriching and stimulating for the reader.
In light of the above-mentioned aspects, “Nerve-Driven Immunity: Neurotransmitters and Neuropeptides in the Immune System” is ideally suited as a textbook for new courses in Immunology, Neurology, Neuro-immunology or Pharmacology.
The book chapters were written by highly skilled authors from 10 countries: the USA, the United Kingdom, Italy, Israel, Sweden, France, Germany, Spain, Serbia and Romania.
“Nerve-Driven Immunity” is a term first coined by Dr. Mia Levite (the editor of the book).

Dr. Mia Levite is a scientist specializing in Neuroimmunology: the communication between the brain and the immune system. Her research focuses on three original neuroimmune topics: (a) ‘Nerve-Driven Immunity’ (a term coined by Dr Levite): The direct effects of neurotransmitters on T cell function; (b) ‘Autoimmune Epilepsy’ (also a term coined by her): Epileptic seizures and neuropsychiatries impairments caused by glutamate-receptor autoantibodies; (c) Ion channels in T cells and their direct linkage to selective T cell functions. She published many pioneering papers on her original findings and has been invited to present her discoveries in numerous international meetings. She did her research at the Weizmann Institute of Science (WIS), Israel, and recently became a Senior Scientist Faculty Member at the School of Behavioral Sciences, within the Academic College of Tel Aviv-Yaffo, Israel.

Dr. Levite's discoveries led to 7 patent applications thus far, providing novel platform technology for therapy of several human diseases. Some of this technology was already licensed to a drug developing company, which develops it now towards novel therapy of cancer and autoimmune diseases.

“The information presented in the book served as the basis of an international meeting on that topic that took place in Vienna … . Each chapter begins with a description of the neurotransmitter/neuropeptide machinery. This is followed by the presentation of the effects of the transmitter on immune cells … . Illustrations in the form of tables and figures are abundant and fully justify the didactic purpose of the book and its use as a textbook for course in immunology, neurology, neuroimmunology or pharmacology.” (Robert Dantzer, Brain, Behavior, and Immunity, Vol. 29, 2013)