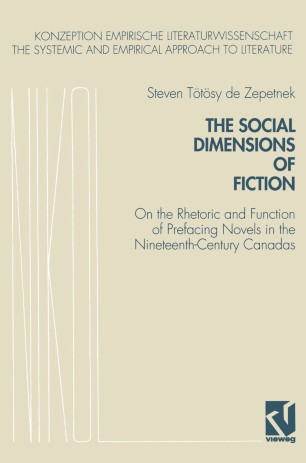 The Social Dimensions of Fiction

This work is a comparative study of nineteenth-century English-Canadian and French­ Canadian novel prefaces, a previously unexplored literary topic. As a study in Comparative Literature - with the application of a specific literary framework and methodology - the study conforms to theoretical and methodological postulates formulated in and prescribed by this framework when applied. This a priori postulate necessitates that the research on and the presentation of the Canadian novel preface be carried out in a specific manner, as follows. First, the study will establish the hypothesis that the preface to nineteenth-century English-Canadian and French-Canadian novels is a genre in its own right. This hypothesis will rest on the following: 1) a taxonomical survey of related terms meaning "preface"; 2) a survey of secondary Iiterature of works dealing with the preface; 3) a discussion of the theoretical framework and methodology of the Empirical Theory of Literature and its appropriateness for the study of the preface; and 4) a discussion of the process of the compilation of the corpus of nineteenth-century Canadian novel prefaces (Chapter one). In a second step, the theoretical postulate outlined in the hypothesis will be put into practice by the development and production of a preface typology (Chapter two). In a third step, further tenets of the Empirical Theory of Literature will be tested on the corpus of the prefaces (Chapter three). In a fourth step, the prefaces will be analysed following the tenets formulated in and prescribed by the systemic framework applied (Chapter four).