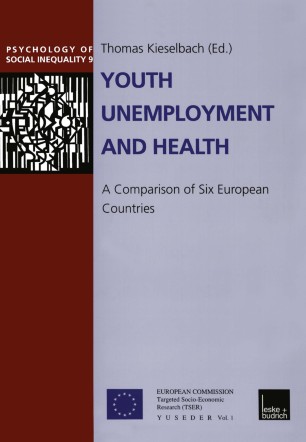 A Comparison of Six European Countries

Youth unemployment has become one of the most crucial social problems in many EU countries. In the 90s it can be observed that in most Western countries, the rate of youth unemployment have risen dramatically, in some of these countries the unemployment problem can be considered primarily a problem of refused entry to the labour market for members of the younger generation. This development increases the risk of psychosocial impairment to the individuals affected as well as to the social fabric in general.
The present volume draws attention to the health effects of long-term youth unemployment in six European countries. It is based upon the results of an international research project (Youth Unemployment and Social Exclusion: Dimensions, Subjective Experiences, and Innovative Institutional Responses in Six Countries of the EU) (YUSEDER) conducted in the framework of the research programme Targeted Socio-Economic Research (TSER) of the European Commission. Partners with different scientific backgrounds (health psychology, public health research, psychiatry, industrial sociology, medical sociology) from six European countries participated in this project.
The contributions in this volume illustrate an initial approach to analysing and comparing empirical evidence on youth unemployment and health from a comparative perspective for three Northern European countries (Sweden, Germany, Belgium) and for three Southern European countries (Spain, Italy, Greece). For each country a specific national report is presented.
The comparative section describes and attempts to explain the similarities and dissimilarities between countries having rather diverse historical and social understandings of being in and out of work for young people.