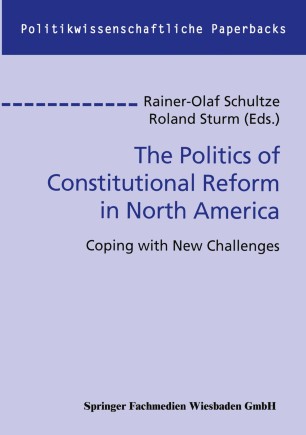 The Politics of Constitutional Reform in North America

In October 1999, some fifteen academic experts and government practitio­ ners from Germany and North America gathered for two days at the Uni ver­ sity of Augsburg to discuss the topic of "Constitutional Reform and Consti­ tutional Jurisprudence in Canada and the United States." The present volume documents the results of that conference, a collaborative effort of the De­ partment of Political Science, University of Erlangen-Nuremberg, and the Institute for Canadian Studies, University of Augsburg. In organizing this workshop, we were guided by two basic sets of ideas and assumptions: First, all "established" democracies are regularly confron­ ted with the need to adjust their constitutional order to changes in their envi­ ronment lest democratic stability be transformed into rigidity; in many wes­ tern nations, including Canada and the United States, developments such as the crisis of the Keynesian welfare-state or the emergence of increasingly heterogeneous, postmodern societies have ushered in an era of heightened, yet not always successful constitutional reform activity. Secondly, however, there is no unique path towards, or model of, an "optimal" constitutional order, however defined; rather, constitutional reform processes, their under­ Iying normative principles and their outcomes are strongly path and context­ dependent. Therefore, the participants of the workshop and authors of this volume were asked to examine the specific preconditions, context, nature and impact of recent constitutional reform processes in the Uni ted States and Canada.