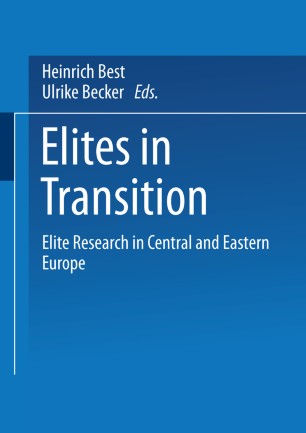 "Who rules in Eastern Europe?" became a fundamental question for western researchers and other observers after communist regimes were established in the region, and it gained further importance as state socialism expanded into Central Europe after the Second World War. A political order which, according to Leninist theory of the state and to subsequent Stalinist political practice, was primarily a highly centralised and repressive power organisation, directed, as if it were natural, researchers attention towards the highest echelon of office holders in party and state. Extreme centralisation of power in these regimes was consequently linked to an elitist approach to analysing them from a distant viewpoint. It is one of the many paradoxes of state socialism, that a social and political order which presumptuously claimed to be the final destination of historical development and to be based on deterministic laws of social evolution, which claimed an egalitarian nature and denied the significance of the individual, was per­ ceived through the idiosyncrasies, rivalries and personal traits of its rulers. The largest part of these societies remained in grey obscurity, onlyoccasion­ ally revealing bits of valid information about a social life distant from the centres of power. It is debatable whether this top-headedness of western re­ search into communist societies created a completely distorted picture of re­ ality, however, it certainly contributed to an overestimation of the stability of these regimes, an underestimation of their factual diversity and a misjudge­ ment of the extent of conflicts and cleavages dividing them.