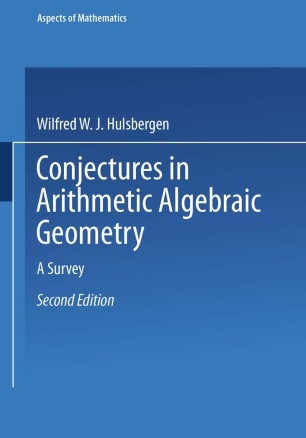 Part of the Aspects of Mathematics book series (ASMA, volume 18)

In this expository text we sketch some interrelations between several famous conjectures in number theory and algebraic geometry that have intrigued math­ ematicians for a long period of time. Starting from Fermat's Last Theorem one is naturally led to introduce L­ functions, the main, motivation being the calculation of class numbers. In partic­ ular, Kummer showed that the class numbers of cyclotomic fields play a decisive role in the corroboration of Fermat's Last Theorem for a large class of exponents. Before Kummer, Dirichlet had already successfully applied his L-functions to the proof of the theorem on arithmetic progressions. Another prominent appearance of an L-function is Riemann's paper where the now famous Riemann Hypothesis was stated. In short, nineteenth century number theory showed that much, if not all, of number theory is reflected by properties of L-functions. Twentieth century number theory, class field theory and algebraic geome­ try only strengthen the nineteenth century number theorists's view. We just mention the work of E. H~cke, E. Artin, A. Weil and A. Grothendieck with his collaborators. Heeke generalized Dirichlet's L-functions to obtain results on the distribution of primes in number fields. Artin introduced his L-functions as a non-abelian generalization of Dirichlet's L-functions with a generalization of class field theory to non-abelian Galois extensions of number fields in mind.