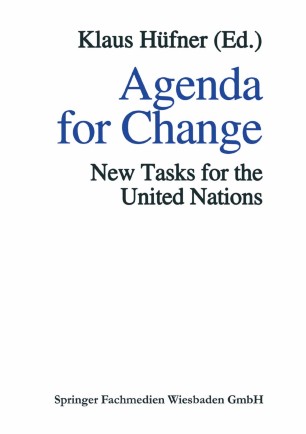 New Tasks for the United Nations

The 50th anniversary of the United Nations Organisation is commemorated in 1995. The UN emerged at the end of the most bloody war in the history of contemporary civilization and it is understandable that its founding fathers were concerned first and foremost with the need "to save succeeding gen­ erations from the scourge of war." This great historical mission of the new international organisation was determined and designed by the allied powers that had won the war against the "enemy states." Cooperation of the perma­ nent members of the UN Security Council was the basic element of the effi­ ciency of post -war system of international peace and security. Apart from this main mission, the founding fathers of the United Nations declared their determination "to reaffirm faith in fundamental human rights, in the dignity and worth of the human person, in the equal rights of men and women and of nations large and small, and to establish conditions under which justice and respect for the obligations arising from treaties and other sources of international law can be maintained, and to promote social prog­ ress and better standards of life in larger freedom" (preamble, UN Charter).