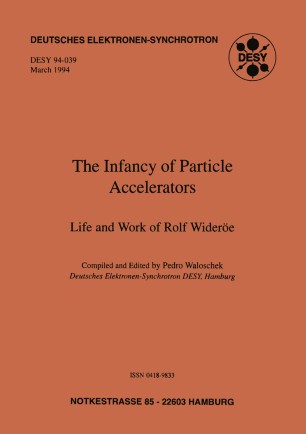 The Infancy of Particle Accelerators

Life and Work of Rolf Wideröe

by Pedro Waloschek The following autobiographical account of Rolf Wideröe's life and work is based on manuscripts and letters written by hirnself, most ofthem especially for this report. Data from audio and video recordings with his illustrations and from my notes taken during aseries ofmeetings between the two ofus were also included. Rolf Wideröe gave me access to many of his publications and to other documents from which I have extracted further information. I have compiled, edited and, where necessary, put the texts in chronological order. These were then corrected and supplemented by Rolf Wideröe during the course of several readings. The English translation was also checked by Wideröe and we were able to add some improvements and corrections. This account there­ fore stands as an authorised biography and is written in the first person. Mrs. Wideröe's accurate memory was of great assistance. The emphasis has been on RolfWideröe's life story and the first developments which led to modem particle accelerators. Techni­ cal and scientific comments have been kept as comprehensive and concise as possible.