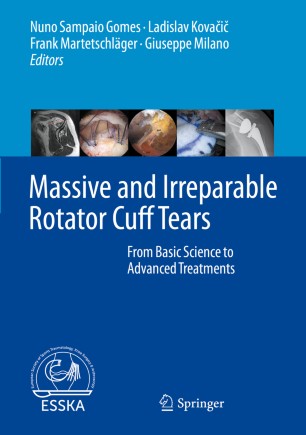 From Basic Science to Advanced Treatments

This book offers a truly comprehensive overview of the understanding and treatment of massive and irreparable rotator cuff tears, a painful and disabling shoulder condition that continues to pose major challenges. A thorough examination of basic science issues and evidence lays the foundation for discussion of key controversies in the field and exposition of a practical approach to treatment in which the role of both conservative and surgical management is explained. Special insights are provided into the new biological and nonoperative approaches that are becoming increasingly popular among practitioners. All potential surgical techniques are described, from partial repair and tendon transfer, to the use of dedicated implants. In addition, the value of anesthesia and regional blocks, both during surgery and in the postoperative phase, is discussed. The concluding section addresses particularly complex scenarios and offers guidance on the management of treatment complications and failures. Written by leading international shoulder experts, the book will be of value for shoulder surgeons, rehabilitators, and other health care practitioners.

Nuno Sampaio Gomes, MD, MSc, is Clinical Director of the Orthopaedic Department at Porto Military Hospital in Portugal, where he has been an orthopaedic surgeon since 2006. He also works in private practice at Hospital da Luz and has been in charge of the shoulder and elbow surgeries in the public hospital of Póvoa de Varzim since 2006. Dr. Gomes graduated from the Medical School of Porto University in September 1996 and gained a Master’s degree in Sports Medicine from the same university in 2001. He subsequently undertook clinical fellowships in Macau, France and Spain and completed his residency in Orthopaedics in 2006. Dr. Gomes has served as a board member of the Shoulder and Elbow Section of the Portuguese Society of Orthopaedics and Traumatology (SPOT) for several years and is currently board member and Chairman for Education in the European Shoulder Associates of ESSKA. He is also an Associate Member of SECEC and ISAKOS and has published a number of scientific articles in indexed journals and collaborated in book projects, besides being a regular reviewer for indexed publications and faculty on international training courses.

Ladislav Kovačič, MD, is an orthopaedic trauma surgeon in the Clinical Department of Traumatology, University Medical Center Ljubljana, Slovenija. This institution is the largest and leading hospital in the country. It accepts patients from elsewhere in Slovenija and neighboring countries. Dr. Kovačič graduated from the Medical Faculty, University of Ljubljana, in 2000 and completed specialization in Traumatology in 2007, when he took up his present position. He also spent one year, 2016, working as orthopaedic and trauma surgeon in France. His professional focus of interest are intraarticular fractures, joint injuries, articular and periarticular pathology, sports traumatology and arthroscopic surgery. For the last few years, he is mainly involved in the treatment of shoulder pathology, performing open and arthroscopic procedures including advanced, complex and revision surgeries. He is involved in various research projects; results of scientific work are published in indexed medical journals. So far, he contributed several chapters in the books on arthroscopy, shoulder surgery and traumatology. He has participated numerous international courses as faculty, where he gave lectures and provides practical training. Traditionally, he is organizing cadaveric course on knee and shoulder arthroscopy in Ljubljana, which is popular educational event in this part of Europe. Dr. Kovačič is an active member of several national and international medical societies. He has been board member of ESSKA-ESA for several years and currently serves as a vice-chair of this section.

Frank Martetschläger, MD, Assoc. Prof., is a Partner at the German Center for Shoulder Surgery (Deutsches Schulterzentrum) at the ATOS Clinic in Munich, Germany. Dr. Martetschläger specializes in disorders of the shoulder, elbow, and all sports-related injuries, with particular focus on advanced shoulder and elbow arthroscopy in the athletic population and complex revision surgery. Prior to joining the German Center for Shoulder Surgery he worked at the Department of Orthopaedic Sports Medicine at the Technical University of Munich as a board-certified specialist for Orthopaedics and Trauma Surgery. During his residency he spent one year at the Steadman Clinic in Vail, CO, USA as a clinical and research fellow. Dr. Martetschläger is a board member and Chairman of the Scientific Committee of ESSKA-ESA. He has authored over 50 peer-reviewed scientific articles, numerous book chapters, and one book on shoulder surgery. His academic work has been recognized with awards from several societies.

Giuseppe Milano, MD, is Full Professor and Chairman of Orthopaedics at the University of Brescia and Director of the Unit of Orthopaedics and Traumatology at the “Spedali Civili” Hospital in Brescia, Italy. He has authored 109 articles in peer-reviewed journals and 38 book chapters and has edited 4 previous books. His areas of research interest are biomechanics of knee ligament reconstruction, cartilage repair and evidence-based medicine in shoulder surgery. He has also received several prestigious awards, such as the Arthroscopy Journal Traveling Fellowship, the ISAKOS John Joyce Award, the EFOST Sport Traumatology Award, the EFORT Jacques Duparc Award, and the Arthroscopy Journal Level I Evidence Prize in 2009. He was also an ESSKA-APOA Traveling Fellow in 2006. Professor Milano is President of SIGASCOT (Italian Society of Knee surgery, Arthroscopy, Sports traumatology, Cartilage repair and Orthopaedic Technologies) for the years 2018-2020, Executive Board Member of ESSKA (European Society of Sports Traumatology, Knee surgery and Arthroscopy) for the years 2018-2020 and Chairman of ESA (European Shoulder Associates) - ESSKA Section for the years 2018-2020. He has also served as as Associate Editor of Arthroscopy from 2011 to 2017 and as reviewer many other relevant journals, such as KSSTA and AJSM. He is currently Editor-in-Chief of Joints, the official journal of SIGASCOT.