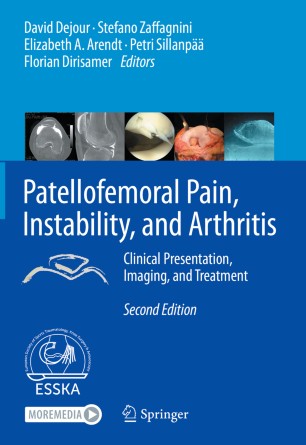 This excellently illustrated book adopts an evidence-based approach to evaluate the efficacy of different techniques for the imaging and treatment of patellofemoral pain, instability, and arthritis. The aim is to equip practitioners with an informative guide that will help them to manage disorders of the patellofemoral joint by casting light on the many issues on which a consensus has been lacking. The opening chapters supply essential background information and explain the role of various imaging modalities, including radiography, CT, MRI, and bone scan. The various conservative and surgical treatment approaches for each of the three presentations – pain, instability, and arthritis – are then described and assessed in depth, with precise guidance on indications and technique. Postoperative management and options in the event of failed surgery are also evaluated. Throughout, careful attention is paid to the literature in an attempt to establish the level of evidence for each imaging and treatment method. The new edition has been thoroughly updated, with inclusion of additional chapters, in order to present the latest knowledge on biomechanics, diagnosis, surgical techniques, and rehabilitation.

Stefano Zaffagnini, MD, is a Full Professor of Orthopaedics and Traumatology at the University of Bologna, Italy and Head of the Complex Department, of the Orthopaedics and Traumatology Clinic (II) and the Sports Traumatology Excellence Center at the Rizzoli Orthopaedic Institute Bologna Italy. His main interests in clinical practice and research are sports traumatology, ACL reconstruction, knee biomechanics, computer-assisted surgery, meniscal replacement, cartilage surgery, and partial/total knee replacement. Dr. Zaffagnini has served on a number of ESSKA, ISAKOS, and SIGASCOT committees and is a past chairman of SIGASCOT. He has also been the Scientific Chairman for three ESSKA and ISAKOS Congresses. He is an editorial board member for a number of journals in the field, the author of more than 300 articles in international journals, and the editor of 14 books.

David H. Dejour, MD, is an orthopaedic surgeon and Medical Director of the Department of Knee and Sports Medicine at the Lyon-Ortho-Clinic in Lyon, France. He is current President of the European Society for Sports Traumatology, Knee Surgery and Arthroscopy (ESSKA) and served as Chairman of the ESSKA Arthroscopy Committee from 2010 to 2012. Dr. Dejour is the editor of four books and more than 80 articles in peer-reviewed international journals. He is an editorial board member for various journals, including Knee Surgery, Sports Traumatology, Arthroscopy; International Orthopaedics (corresponding member); and Joints (official journal of SIGASCOT).

Elizabeth A. Arendt, MD, is Professor and Vice Chair of the Department of Orthopaedic Surgery at the University of Minnesota, Minneapolis, USA. She has served on many professional committees, including the ESSKA Scientific Committee and the ISAKOS Knee Committee, which she chaired from 2015 to 2017. She is a memeber of the International Patellofemoral Study Group.  Dr. Arendt has been the recipient of many honors and awards incliding the Patellofemoral Lifetime Achievement Award. She is an editorial board member for a number of journals, including The American Journal of Sports Medicine, and has authored  more than 100 peer-reviewed journal articles and  40 book chapters.

Petri Sillanpää, MD, PhD, is chief surgeon in the Department of Orthopaedics and Trauma at Pihjalalinna Koskisairaala Hospital, Tampere, Finland. He also lectures in pediatric orthopaedics at the University of Tampere. Dr. Sillanpää is an expert in knee and sports medicine and especially patellofemoral joint and pediatric knee disorders, on which he has published many studies. He is current president of the Finnish Arthroscopy Association and a board member of the Finnish Knee Association.  He is chairman of the ESSKA Patellofemoral Instability Committee and a member of the ISAKOS Knee: Sports & Preservation Committee and the International Patellofemoral Study Group.

Florian Dirisamer, MD, is a specialist in orthopaedic sports medicine who has worked in private practice since 2014, having previously been Head of the Knee & Sports Division at St. Vincent Hospital in Linz, Austria. His clinical and scientific focus is on knee surgery, including complex reconstructions, patellofemoral joint, meniscus allograft, transplantation, and arthroplasty, and his journal publications reflect these interests. Dr. Dirisamer is co-chair of the Austrian Society for Arthroscopy and Joint Surgery’s patellofemoral committee and a member of the ESSKA Osteotomy Committee.