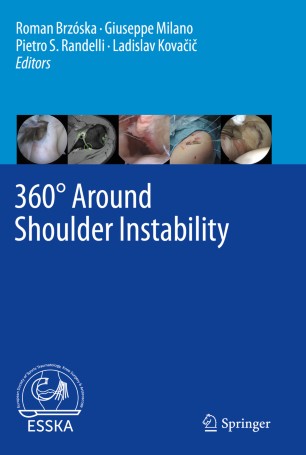 This book presents the current status of shoulder instability treatment with the aim of equipping readers with a comprehensive understanding of the latest concepts of shoulder instability, diagnosis and the decision-making process, conservative treatment, state of the art surgical techniques, and management of treatment failures. Written by leading European and overseas specialists, the book merges the authors’ clinical experience with expert opinions and up-to-date research data to offer shoulder surgeons, physiotherapists, other shoulder practitioners, and residents strong support in everyday practice. The coverage encompasses such pathologies as ALPSA, SLAP, HAGL, and Bankart lesions, and readers will find clear descriptions of soft tissue management, arthroscopic and open stabilization techniques, and recently published bone transfer techniques. Not only is the book copiously illustrated, but it also includes case examples, further illustrations, and links to high-resolution videos of the newest shoulder stabilization techniques performed by globally renowned experts. 360° Around Shoulder Instability is published in cooperation with ESSKA-ESA and is based on the 2nd biennial ESSKA-ESA meeting of the same name.

Roman Brzóska, MD, PhD, has worked at St. Luke’s Hospital, Center for Advanced Arthroscopic Surgery, Bielsko-Biala, Poland since 2001, and in 2010 he became Head of the Upper Limb Department at the Center. Dr. Brzóska graduated from the Silesian Medical Academy in Katowice in 1997. He completed medical specialization in Orthopaedics and Traumatology in 2006 and was awarded his doctorate by the Jagiellonian University Krakow in 2010. He has participated in more than 80 international congresses, chaired three international orthopaedic symposia with live shoulder surgery transmissions, and organized numerous international cadaver lab courses and basic and advanced courses on shoulder arthroscopy. Dr. Brzóska has served as Chair of ESSKA-ESA (2016–8) and at the time of writing is President-Elect of the Shoulder and Elbow Section of the Polish Society of Orthopaedics and Traumatology. He is co-editor of the Springer book Management of Failed Shoulder Surgery (2018).

Giuseppe Milano, MD, is Full Professor and Chairman of Orthopaedics at the University of Brescia and Director of the Unit of Orthopaedics and Traumatology at the “Spedali Civili” Hospital in Brescia, Italy. He has authored 109 articles in peer-reviewed journals and 38 book chapters and has edited 4 previous books. His areas of research interest are biomechanics of knee ligament reconstruction, cartilage repair and evidence-based medicine in shoulder surgery. He has also received several prestigious awards, such as the Arthroscopy Journal Traveling Fellowship, the ISAKOS John Joyce Award, the EFOST Sport Traumatology Award, the EFORT Jacques Duparc Award, and the Arthroscopy Journal Level I Evidence Prize in 2009. He was also an ESSKA-APOA Traveling Fellow in 2006. Professor Milano is President of SIGASCOT (Italian Society of Knee surgery, Arthroscopy, Sports traumatology, Cartilage repair and Orthopaedic Technologies) for the years 2018-2020, Executive Board Member of ESSKA (European Society of Sports Traumatology, Knee surgery and Arthroscopy) for the years 2018-2020 and Chairman of ESA (European Shoulder Associates) - ESSKA Section for the years 2018-2020. He has also served as as Associate Editor of Arthroscopy from 2011 to 2017 and as reviewer many other relevant journals, such as KSSTA and AJSM. He is currently Editor-in-Chief of Joints, the official journal of SIGASCOT.

Ladislav Kovačič, MD, is an orthopaedic trauma surgeon in the Clinical Department of Traumatology, University Medical Center Ljubljana, Slovenija. This institution is the largest and leading hospital in the country. It accepts patients from elsewhere in Slovenija and neighboring countries. Dr. Kovačič graduated from the Medical Faculty, University of Ljubljana, in 2000 and completed specialization in Traumatology in 2007, when he took up his present position. He also spent one year, 2016, working as orthopaedic and trauma surgeon in France. His professional focus of interest are intraarticular fractures, joint injuries, articular and periarticular pathology, sports traumatology and arthroscopic surgery. For the last few years, he is mainly involved in the treatment of shoulder pathology, performing open and arthroscopic procedures including advanced, complex and revision surgeries. He is involved in various research projects; results of scientific work are published in indexed medical journals. So far, he contributed several chapters in the books on arthroscopy, shoulder surgery and traumatology. He has participated numerous international courses as faculty, where he gave lectures and provides practical training. Traditionally, he is organizing cadaveric course on knee and shoulder arthroscopy in Ljubljana, which is popular educational event in this part of Europe. Dr. Kovačič is an active member of several national and international medical societies. He has been board member of ESSKA-ESA for several years and currently serves as a vice-chair of this section.

“This book targets arthroscopy colleagues around the world who wish to understand the state of the art of shoulder arthroscopy for instability in Europe. … This monograph is a valuable read that presents ideas and perspectives from an elite group of speakers at the 2017 European Society of Arthroscopy. I enjoyed the opportunity to learn from European leaders in shoulder arthroscopy and gather the pearls they had to share.” (Mark R Hutchinson, Doody's Book Reviews, November 13, 2020)